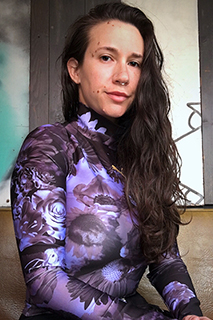 Jena Carter (Choctaw Nation of Oklahoma) is a writer based in Los Angeles. As a member of the LGBTQIA+ community who hails from a mixed Native, Ashkenazi Jewish & Caucasian background, much of their work explores themes of gender roles, sexuality and orientation, femme identity and the complexities around a diverse background; they often weave pieces of mythology (both Native and non-Native) and animal imagery into their writing. In 2011, they received a BFA in Fine Art with an emphasis in Photography from the School of the Museum of Fine Arts at Tufts University in Boston, MA. They joined the staff at the USC School of Cinematic Arts in Media Arts + Practice in 2013 where they worked on numerous high-level grant funded projects with collaborators from NASA, the U.S. State Department and Microsoft alongside industry professionals at the university. Before grad school, they cut their teeth in the industry as a reader for Intellectual Property Group (IPG) and worked on numerous web series and short films as an on-set photographer and PA, and in 2017 they earned their MFA from USC’s John Wells Division of Writing for Screen & Television, graduating with a thesis in one-hour television drama. During their final year of graduate school, they were the recipient of the Frank Daniel Endowment Fund Scholarship.
×