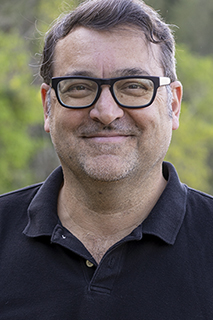 Justin Hunter Reed is a Salishan writer and producer from the Confederated Salish& Kootenai Tribes. Ever since he was conceived on the Flathead Indian reservation in Montana and born on a U.S. Army base in Kansas, he has been a devout adherent of the Church of Irony. A semi-misspent youth isolating himself practicing and playing basketball led to a firefly-brief collegiate career for the IowaHawkeyes and North Dakota Fighting Sioux, until retirement from the sport at 20.He finished his non-basketball playing education at the University of Chicago, where he was a proud member (and projectionist) at Doc Films, the nation’s oldest student film society.Wending his way through early adulthood found him writing pieces on movies and books for the Chicago Film Review and the Chicago Reader.Seeing the writing on the wall for print publication, he got work at a theater company. While there he received an NEA Grant for a literary theatrical production called WeepFest (never staged). Wanting to move up the economic ladder and get to New YorkCity, his NFP talents snagged him a job running a cross-cultural educational501c(3) and, based on the cost of living adjustment, a pay cut.Not long after his move, he began a transition to film and TV production, although those are merely words since he had no contacts or notions of how to get involved. Once he learned the vast majority of the industry starts this way he felt himself to be on the right track. Eventually (i.e. through Craigslist), he found his way to work as an unpaid researcher on Helen Whitney’s PBS documentary,Forgiveness: A Time to Love and a Time to Hate (2011). This tiny encouragement led to years of writing TV scripts received with the deafening sound of nothingness. Day jobs to support this nasty, liberating habit were carpentry, accounting and video production. One fun and rewarding project he wrote, produced and edited is a short film and DVD commemorating the 25th Anniversary of The French Laundry restaurant. The short film (and DVD) included cameos by Adam Sandler, James L.Brooks and Phil Rosenthal.Having lived in the national metropolitan triptych of Chicago, New York andLos Angles for two-plus decades, Reed and his wife Kate and their two Bronx-born rescue dogs, Fig and Sunny, relocated to rural northern California in 2019.The nearest movie theater is 35 minutes away but streaming services are downstairs. Now filled primarily with vineyards, these lands were historically home to the Pomo, Miwok and Wappo. A very few of them live nearby, on and around the Graton Rancheria, restored to a federally recognized tribe in 2000, 42years after losing the designation.
×