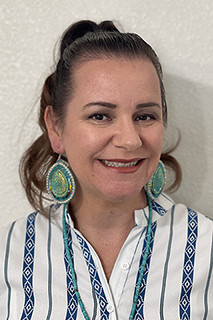 Kristen Calderon (Acjachemen/Kumeyaay) grew up in Southern California. She has
wanted to tell stories since she was very young. Her goal to become a writer became clear to her in 5th grade, when a class assignment about writing a time travel story made her teacher tell her she should be a writer when she grows up. Instead of starting a writing career, however, she joined her local Sheriff’s Department, where she remained for 13 years, which has inspired some of her work. She married her only high school boyfriend and started a family, putting her writing career on the backburner to work full time and raise her family. She thought she was going to write novels, until she was asked to proofread a friend’s homework assignment for his film school, that she fell in love with screenwriting. She decided to pursue that passion and joined the Women of Color Unite group to find a mentor and learn more about the world of Screenwriting. In this mentorship, she learned about a writing group called Catalyst Writing Groups and she joined. It has truly helped her learn more of the complexities of Screenwriting. She also met a wonderful mentor who has helped guide her towards furthering her Screenwriting career, and she will be forever grateful. Kristen would love to help tell the stories of Indigenous people in a way that modernizes the Indigenous communities so we can prove we are still here and don’t exist only in the past. There are many issues in the Indigenous communities that people aren’t aware of that she would like to put a spotlight on. Kristen lives on the San Pasqual reservation, where she is a descendant, with her husband and two children, amongst her whole family.