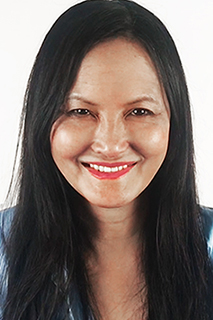 Meilani Wenska is an award-winning Native Hawaiian screenwriter, filmmaker and actor who creates
projects that dispel stereotypes and misinformation about Hawaiian culture to raise awareness on the
commodification of Hawaiian land and culture. She has written multiple features and pilots, and her second feature was a semi-finalist in Final Cut’s Big Break contest. As a filmmaker, Meilani has produced, written and directed four short films, and her latest, “Times 2,” recently made its premiere this year as an official selection at two film festivals and won “Best Sci-Fi” and a Semi-Finalist award in them. “808,” her prior film, is an official selection in 17 film festivals—winning 8 awards, including Best Indigenous Short Film. Last summer, she was selected as a fellow in the Native American Writers Seminar; in it she attended high level industry panels and worked with a production company executive mentor and a mock writers room on a pilot rewrite. The fellows in the program developed such a bond that they are now writing and producing a feature length film with Meilani as Co-Director at the helm. Meilani also has a thriving online art store with fans from around the world who love her watercolor-style prints. When she’s not creating art, you might find her hiking or or taking landscape photos. She currently resides in Los Angeles.