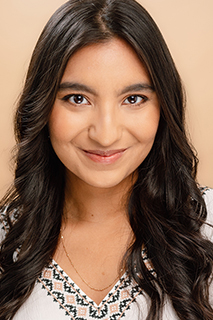 Sabrina Saleha is a Navajo (Diné), Todích’íí’nii clan and Bangladeshi-American storyteller. She is a screenwriter, who has written and produced her short films. And an actress whose credits include upcoming Netflix, Sony Original TV series and several indie films. Screenwriting is a second-act career. After graduating from North Carolina State University with a Business Degree, she worked in the tech industry in Silicon Valley for several years. It was there she founded the Native American Employee Resource Organization and secured partnership with Native American organizations on college campuses to create a pipeline for Indigenous talent. Bit by the travel bug, she packed up her things and traded her corporate life for full-time living in a van to travel to the National Parks. Sabrina’s life experience as a bi-racial woman, Native American and South Asian, in a small town in North Carolina to a Van-lifer in the arts is featured in the Emmy-nominated documentary, The Story of US: A PBS American Portrait story. Today, Sabrina is a screenwriter and actress based in Atlanta, Georgia. She has produced short films and focuses in the fantasy and sci-fi genres. Sabrina is currently a Screenwriting MFA candidate at the Institute of American Indian Arts in Santa Fe, New Mexico. As an actress, Sabrina started in the local North Carolina theater stages and now in TV/Film. She has appeared in several indie films and in upcoming TV series with Netflix and Sony Originals. Sabrina’s inspiration as a storyteller is to tell stories her little brother would’ve loved. She lost her young brother when he was 17, and through her grief and passion for storytelling has cultivated her strong purpose. To share stories for the young Native American generations to feel seen and accurately represented in TV/Film. It’s her core drive to tell stories that reflect her love of her culture and an inspiration to show younger generations that they’re loved and can dream to be whoever they want to be in this world.