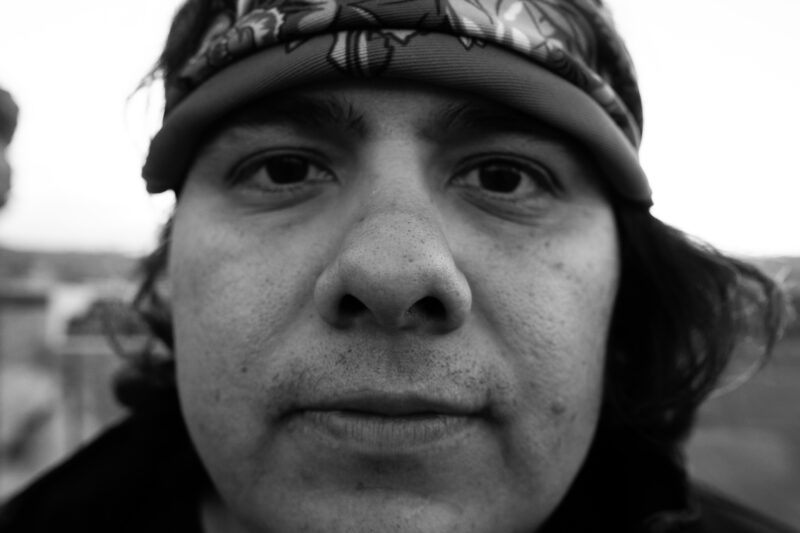 Steven Tallas (Navajo) is an Award-Winning Filmmaker known for his debut feature film, 2019’s Rez Dogs. Growing up, Steven wanted nothing more than to see someone like himself starring in the movies he enjoyed most. With his penchant for storytelling and love of cinema, it’s no surprise that he found his calling in filmmaking. He began creating films as a teenager, learning from online resources and his experiences as an extra on film sets throughout the New Mexico and Arizona.

While filming Rez Dogs the movie back in 2019 before the pandemic he didn’t have a lot of resources. But he made the most of what he had and shot the movie in 4 days on the rez with a crew of just his family, friends, a tripod, a small DSLR camera, a 50 mm lens, a boom mic and some awesome people that believed in the movie. The long days and nights were well worth the blood sweat and tears, but after the movie was finished the premiere was cut short due to the deadly covid pandemic sweeping the world. That didn’t stop Steven from releasing it through creation of a DVD that he sold at the local flea markets around the reservation. The movie won 3 awards including best feature film at the Gallup Film Festival, Best Native American Feature film at the Will Rogers Motion Picture Film Festival, and the Spirit Award for the entire Montana International Film Festival. It had shown in countless film festivals online all over the country and overseas. During the filming of the movie, one of the main characters backed out at the very last minute and Steven couldn’t find anyone to play the role. To save the movie he stepped in an acted the role of Johnny AKA Rez Rhyme the native rapper in the movie. Not only did he have to direct but also act in the movie as well. This taught him a lot about the Indie film process and from that moment on he couldn’t get enough of storytelling. He hoped that making this feature film that others on the reservations can follow in his footsteps and show that you don’t need a Hollywood crew or millions of dollars. All you need is a camera, some friends and a little bit of creativity and you can make anything happen. Currently he is working on his found footage film called Skin Walker cave which is a feature length horror film about the Navajo legends of Skin walkers.

Paired with his passion for sharing his heritage, Steven uses filmmaking to create opportunities for fair representation of the Navajo Nation in art and media. His goal is to share the stories and the history of Native Americans that Hollywood has often overlooked.

Through his work, Steven also hopes to create films with messages and characters that younger generations can identify with, films that he hopes will make his younger self proud. Visit StevenTallas.com to learn more about his projects today.